Most work done by me. Special thanks to cogitoergor00t and all the JBZ crew.

PAX is a Chinese manufacturer of payment devices, and as per their claim they have sold more than 34 million units in 110 countries.

They mainly have two kinds of products, those based on ProlinOS, which is a custom OS developed by them and derived from Android and those based directly on a more vanilla Android.

This research is focused on the devices running ProlinOS, which are:

Other models might be running ProlinOS too but their specification is not detailed on the official PAX website.

For this research, I have bought a S900 from eBay and was lucky enough to find a used model targeted at developers. I will specify when something applies only to the developer model and not the production ones, although very little differs in terms of vulnerabilities. 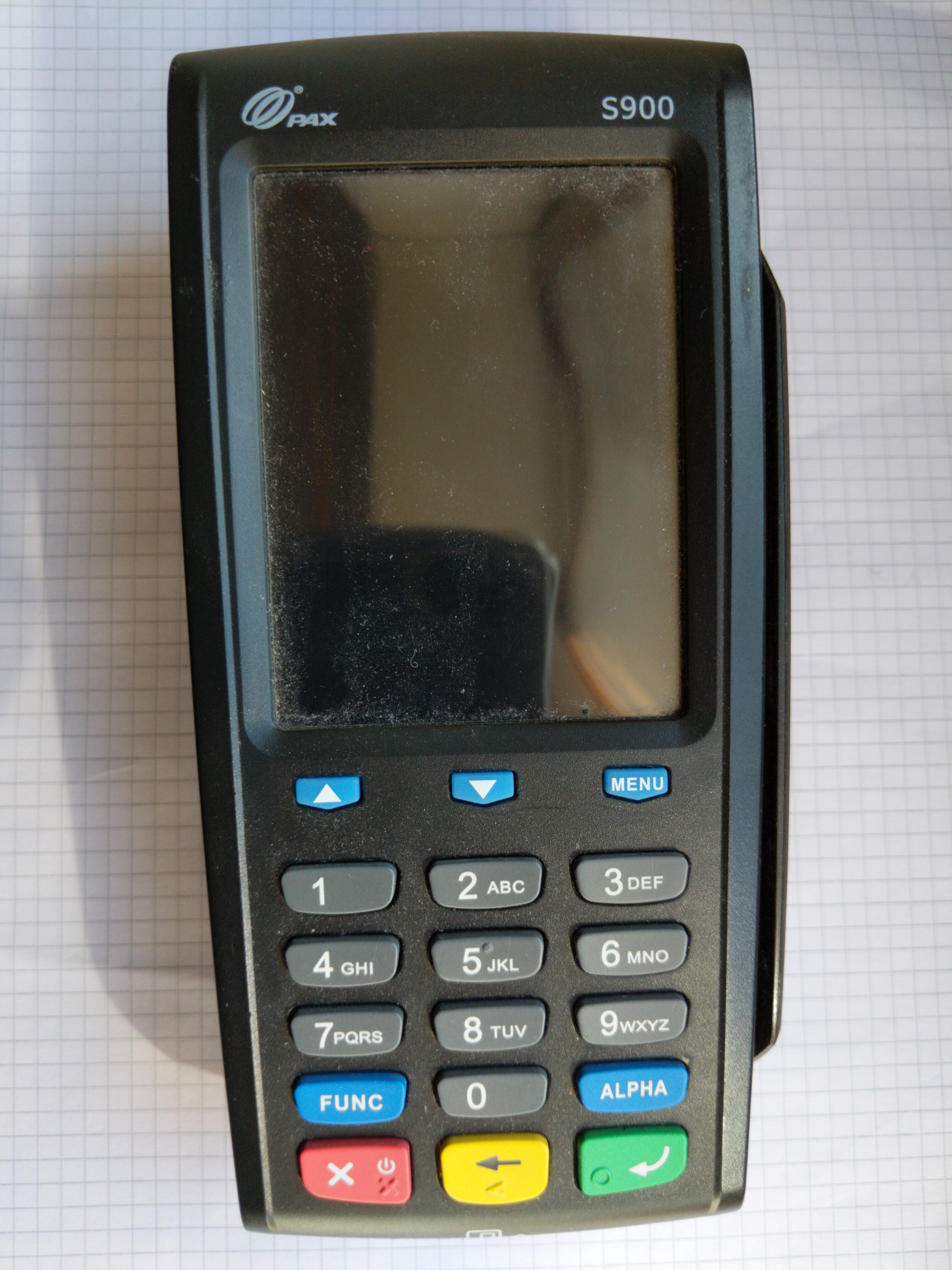 Before starting the analysis, I found the following resources very useful:

It's possible to see clearly from the Internal Photos PDF that the device has an additional battery and multiple anti-tampering contacts; there's also a warranty sticker on the side. Hardware attacks are probably possible, but out of scope here as I lack both skills and equipment to work in that direction. Furthermore, a hardware attack would be more difficult to execute in real-life scenarios because of the circumstances in which a POS is used.

The device has a color display, WiFi, GSM, Bluetooth, an AC charging port, and two mini USB ports. From the specifications, one is used for serial communication and the other one for USB communication. It has a Broadcom BCM5892, 128MB of flash and 64MB of RAM.

ProlinOS is a minimal Linux distribution, probably derived from Android.

The device needs to be rebooted into the management interface (called TM). To do so on the S900 press the number 2 repeatedly during boot (even after the SELF-TEST screen). On the D200 do the same but with the key F2. Other devices have probably similar keys, and they can be guessed in a few attempts.

From there go to System Config. enter the default pin which is 123456 and enable the XCB service. The XCB service can run both via the serial interface and network, depending on the model and the version of ProlinOS. For the serial interface, use the driver provided in the links in the Intro section, for the network interface, first connect the device to a WiFi network and the service will be on <ip>:5555.

The development kit found online is composed of a GUI called TermAssist on Windows and an executable, called xcb. It turns out that TermAssist is just an interface of xcb.

It turns out, that, although xcb calls itself Xos Communication Bridge it's just a slightly modified version android ADB.

I reversed the client and modified python-adb accordingly (and also added code to make it work over serial interface). Here's the repository for the custom client. Pull request to add serial support to python-adb.

shell functionality has been removed, as many others, but push, pull, ls and port forwarding are still available even if not present in the program help. Supposedly, xcb is intended only for adding applications to the device (which needs to be signed), updating ProlinOS (again, signed stuff), adding assets to existing applications (images, front, etc all unsigned) and eventually adding user-provided keys for signing packages. It is yet unclear to me if user-provided keys need to be signed by the manufacturer and in which format they are to be supplied because I didn't look into it.

There's also a telnet command which will port forward to the local machine a telnet daemon. This command will only work on development devices because the whole telnet binary is removed from busybox on production devices.

We'll see that from debug level 0 it is possible to escalate to root privileges. The pos used for this article is in debug level 1. A production device won't have a working telnet/shell by default. However that functionality can be restored by overwriting a shared library using the arbitrary read/write in XCB or by porting the already signed binaries from a debug device.

From the development S900:

As described in the "Communication" section, it is possible to list, read and write file and folders with MAINAPP permissions via XCB.

Although ELF files need to be signed in order to be executed (later we'll see how), libraries apparently do not. This means that it is possible to run custom executables without issues, given that we have a working shell and LD_PRELOAD is working or that, even without a shell, we can overwrite a library in use by some application.

installer, which is the executable being called by xcbd (the xcb daemon server, like adbd) is responsible for verifying binary files before adding them. This does not mean that the kernel doesn't check again (it does) but means that ELF signature verification is available via userspace and is provided by a kernel module.

It simply opens the device /dev/verify, uses some ioctl calls and send the executable file. Depending on the ioctl results it is possible to determine if a binary file has been correctly signed. As per the signature format, it's possible to guess that it is simply made by an RSA 2048 signature appended at the end of the file plus the string SIGNED_VER:00001.

By looking into the device, there are mainly two possible vectors of privilege escalation which are:

I did try a couple of dirtycow payloads but they didn't work. I'm no kernel hacker and I have no privileges to debug the kernel (which by the way has been modified by PAX developers) so the xtables-multi binary looks more promising.

For those who don't know, xtables-multi is xtables multi-link binary for Netfilter's iptables and ip6tables.

As we can see the version is not so new.

By just searching, in theory, it should be vulnerable to CVE-2019-11360. After a brief look at our xtables-multi binary which seems to have not been greatly modified from the original, and by looking at the source code of version 1.4.21, it's possible to see that it should indeed be vulnerable:

With a couple of test it is possible to obtain a Segfault in both cases. ASLR is enabled and the NX bit is set, but no other protections seem to be present.

This way looked promising but in the meantime, we found a simpler way.

Iptables has a --modprobe options which is present in the usage documentation but is not greatly explicited on what it accepts and on how does it work. I already used it for a privilege escalation in a local CTF when the iptables binary was the only command allowed in sudoers.

As on how does it work it basically executes the command provided to the --modprobe switch, which might be an executable or a shell script. The main requirement is that the required module must be missing (otherwise the whole modprobe thing is useless), meaning that for example the nat module must be unloaded.

So the first requirement is satisfied. However, it didn't work because the command didn't get executed because as it turns out, before attempting to load the module manually the code will check if the /proc/net/ip_tables_names file exists and use it as a reference.

Luckily there's also ip6tables which requires a different file, called /proc/net/ip6_tables_names and since we all know that the world is not IPv6 ready, this one indeed doesn't exists.

Lastly, we need a signed executable to run or a script (scripts do work because the interpreter, busybox is signed). Unfortunately, busybox, if run this way will instantly drop its privileges. Also, we cannot pass LD_PRELOAD to an execv call so the only way is to actually swap a library used by a signed executable that we can call.

Luckily, on my device there are two user-installed apps (every working terminal must have at least one) and they both use shared libraries which are writeable by the low privileged user. I wouldn't say that this itself is some kind of vulnerability because our current user is indeed the user responsible for installing (and thus if required overwriting) the applications and their assets.

Here are the two executables which are user writeable:

These libraries, on the device are in /data/app/MAINAPP/lib/. I choose to overwrite libsqlite3.so with privesc.so:

The bootloader is U-Boot.

This is the partition scheme:

The file init.rc gives an idea on how the system is started and how different debug levels are handled.

/usr/bin/tm is the binary responsible for the GUI management. The system password is AES encrypted and is stored in a user readable property:

Hardware driver are implemented via a low level kernel module and a higher level abastraction module, and are available via the libosal.so library. In the case of this hardware revision of the S900, For the RFID reader:

For the magnetic stripe reader the family of functions is OSMsr* that uses the /dev/msr device and for SmartCards there are the OsIcc* functions that use the /dev/usercard device.

The graphic interface library is libxui.so.

By finding a vulnerability in a Merchant App, in libosal.so or in one in the kernel drivers a remote attack via a payment vector is theoretically possible. Unfortunately, due to the lack of second hand production PoS in the used market, I'm unable to get a test device with a working Merchant App unless I open a contract with a bank (which I don't want to). If anyone has contacts or is willing to provide one, or need assistance for futher research drop me an email or a tweet.

I tried contacting several times PAX Global via email and never got a reply related to anything: neither about the security vulneabilities, neither on inquiries about the source code for the GPL licensed software (Linux/U-Boot).

Following this public disclosure PAX got in touch with me. It turned out my previous emails on June 2020 were marked as spam and never read. Here's their official answer for the following two question:

Until I found how that file is being generated (/startup/data-skeleton.sh):